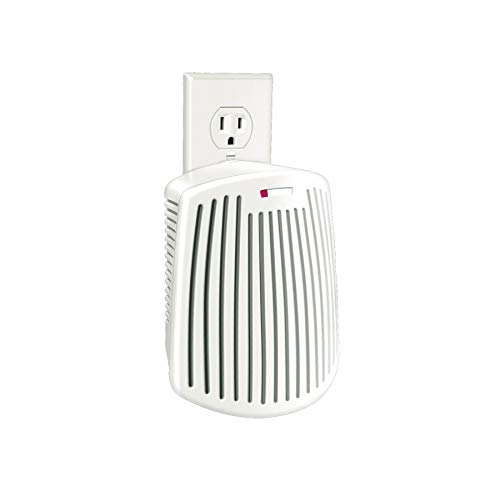 Hamilton Beach TrueAir Plug Mount Odor Eliminator
Quiet fan pulls in air while the carbon filter neutralizes odors.
Uses a standard 110-volt outlet and is easy to use.
Filter replacement indictor let's you know when it's time to change the filer.
Check Price on Amazon

This air freshener takes a two-step approach to better smelling air around your litter box area. The first step is the built-in fan that draws smelly litter box odors into the unit, where they become trapped in a replaceable carbon filter. The next step is the release of clean, lightly scented air back into the room. The carbon filter lasts up to three months and is easily replaceable with inserts that can be purchased separately.

This air freshener from Hamilton Beach plugs into any standard wall outlet and can even come with a nightlight. The fresh scent that this air freshener releases is optional, so you can have cleaner smelling air without the artificial fragrance.

Since this air freshener has a fan, it’s going to make some noise. This can be an issue depending on the size of the room that you put it in. Also, the scent packet doesn’t last as long as the filter, so if you want a little artificial smell on top of the filtering, you’ll need to replace it more often.

LEVOIT Air Purifier
America's #1 air purifier brand.
Super quiet operation while in sleep mode.
Improve air quality and helps you and your pet relieve allergic symptoms like sneezing, coughing, stuffy nose, and sinuses.
Comes with a lock button so your pets can't tamper with the settings.
Check Price on Amazon

If your kitty is causing more than just an odor problem in your home, the Levoit Air Purifier can help rid your home of the litter box smell and pet dander at the same time. This air purifier uses HEPA filtration to remove 99.97% of those harmful irritants from the air, including litter box odor. This provides a fresher smell for your home and healthier air to breathe.

On top of removing odor and pet dander, this air purifier also removes mold, smoke, and pollen. It is quiet enough to use in a bedroom and has a sleep timer should you need a more silent mode for nighttime. There is also a pet lock system in place to help keep your fur babies from pushing buttons and changing the modes. The small size makes it perfect for litter box areas, but it is capable of cleaning the air in a 219 square foot room.

This product is a little pricier than other air fresheners on this list. On top of the initial cost, filter replacements can be expensive too. It is also recommended that the filter be vacuumed at least every two weeks for the best results. 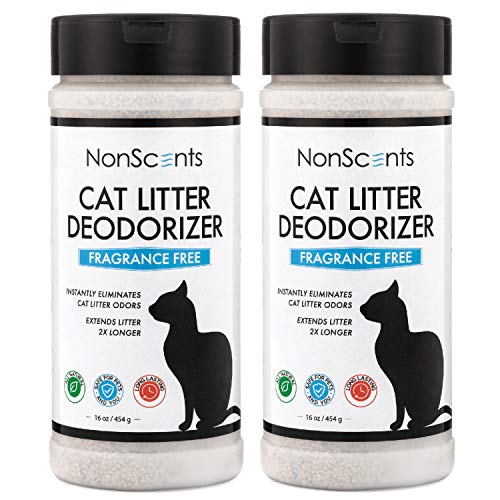 NonScents Cat Litter Deodorizer
A natural product that is safe for you and your pets.
Fragrance free and easy to apply.
Extends the life of your kitty litter.
Check Price on Amazon

The NonScents Cat Litter Deodorizer is a product that you sprinkle on top of your regular cat litter. From there, it neutralizes litter box odors at the source with no additional work from you. Odors will be locked in and thrown away with the litter when the litter box is cleaned. This product is safe and non-toxic to you or your kitty.

Not only will NonScents neutralize your litter box odors and leave your cat’s area smelling better, but it will also help extend the life of your cat litter. This will allow you to use less litter, save money, and reduce waste. This product has no fragrance, so you and your cat won’t be overpowered by a perfumy smell.

This is a dry, powdery product, so there is a possibility of respiratory issues if inhaled. Your best bet is to use the product and leave the room, allowing it time to settle. If possible, don’t let your kitty in the room for a few minutes as well. Even though it is a fragrance-free air freshener, some pet owners say it has a slightly chlorine-like smell, which is not over-powering but noticeable. 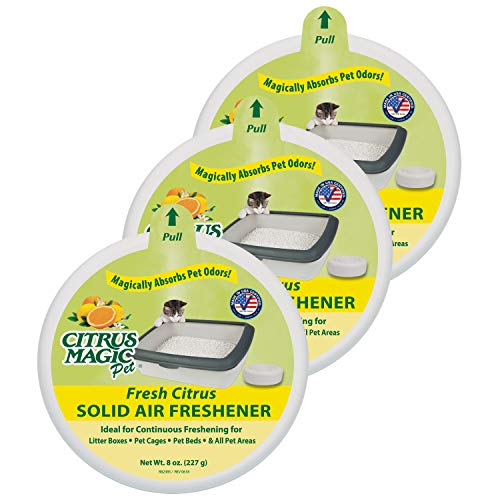 Another option for cat litter box areas without access to an outlet is the Citrus Magic Pet Odor Absorbing Solid Air Freshener. This product can be placed in your litter box room and left to do its magic. It uses baking soda and other odor eliminators. Not only does this solid air freshener absorb unwanted litter box funk, but it also releases a light citrusy or linen scent. This scent isn’t masking litter box odor; rather, it should be seen as a bonus fragrance.

The Citrus Magic Pet Odor Absorbing Solid comes in different sizes to accommodate different types of areas. They also last for varying amounts of time. The smaller eight-ounce version lasts for up to six weeks, while the larger 20-ounce version can last up to 14 weeks. This means you can set one out and forget about litter box odor for over a month.

If you have a multi-cat household, you may need to look for something a little bit stronger. 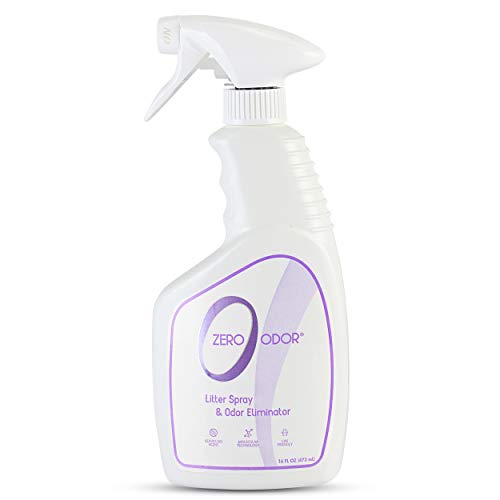 Zero Odor Pet Odor Eliminator Spray
Non-toxic, non-allergenic, cruelty free and easy to apply.
Does not cover up or mask odors with a fragrance or perfume.
Works on clay and clumping litter.
Check Price on Amazon

The Zero Odor Pet Odor Eliminator is a great option for quick and easy litter box odor removal. This spray can be used on surfaces or sprayed into the air. Spray it directly on your clumping or non-clumping cat litter for quick odor neutralization. This spray traps odors and neutralizes them so that they no longer linger in your household.

Zero Odor doesn’t have any additional fragrances to mask the odor. However, it does have a tracer scent that lingers temporarily to help you know where you have sprayed. This product is also biodegradable, safe, and non-toxic to you and your cats. It also won’t irritate allergies or other respiratory sensitivities. Other products from Zero Odor can be used on laundry and other areas of the home as well.

This air freshener spray from Zero Odor is made to work with clumping and non-clumping clay litter. Other litters might not yield the same results. In fact, corn or other flushable litters didn’t show the same odor clearing results. Also, this product might not last very long. It neutralizes the odors in the air or on the surface but doesn’t linger to capture future odors.

Even though you love your feline friend, their litter box odor can sometimes wear out their welcome in your home. When scooping and cleaning aren’t enough, you may want to look into getting an air freshener for your litter box. Here’s what you need to know.

What to Look for in Air Fresheners for Litter Boxes

Getting the right air freshener for your litter box isn’t as easy as picking out a pleasing scent. Instead, there are many different attributes to take into consideration.

Just be sure to think about your specific litter box situation when purchasing an air freshener. If it’s tucked away in a confined space, a smaller freshener may be better. If it’s out in the open, you’ll need something that can handle larger areas. Also, consider your access to an outlet if you’re looking for something that needs power. Finally, consider your kitty’s needs. If they are sensitive to smells or sounds, you’ll want to find something more inconspicuous.

If your cat’s litter box odor is starting to come between the two of you, it may be time to get a litter box air freshener. Whichever one you choose, make sure that it is safe to use around your cat. After that, you can choose one based on your personal preferences and litter box needs.

Dr. Chyrle Bonk has been practicing veterinary medicine since 2010. She lives in Idaho with her husband and two sons, where they spend their free time exploring the great outdoors that is right in their backyard.

As an Amazon Associate I earn from qualifying purchases.

We may also earn commissions, at no cost to you, from certain products or services listed on this website.